Guide to the statues of Dublin 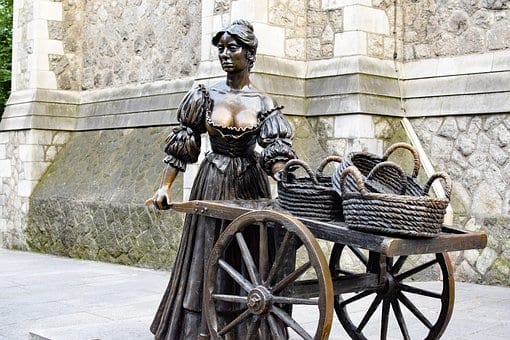 Dublin city is the home of many famous writers, poets and performers such as Oscar Wilde, James Joyce and Phil Lynott. Statues were made to honour these famous figures which have become well visited and loved statues in Ireland’s capital city.  A trip to Ireland’s capital would not be complete without stopping by a few of these landmarks.

Roam the streets with Molly Malone

We will start the tour with Molly Malone as she is known for selling her cockles and mussels in Dublin fair city. She sits on Suffolk Street just off the renowned shopping street Grafton Street which is also a great spot to listen to Irish street performers. The Molly Malone statue is Dublin’s most photographed statue over all of Dublin as her story and song is an Irish legacy. It is a must to get a photo with her and her trolley!

Dine in the Wilde with Oscar

While in the area you can make your way to St. Stephens Green Park and Merrion Square where many statues are hidden among the parks including, William Butler Yeats, Wolfe Tone and Oscar Wilde. The park is the ideal place to grab some lunch and take some time to take in all the statues that are scattered around the park between beautiful flowerbeds and water features.

Rock out with Phil Lynott

Before crossing the Ha’penny Bridge why not visit the Phil Lynott statue who is best known as the frontman for the band Thin Lizzy. The too-short life of Phil Lynott is remembered with a life-size statue on Harry Street right outside Phil Lynott’s favourite pub. Holding a bass guitar the statue is daily visited by fans, locals and tourists. The perfect place to get a photo with the musical legend.

“How you was, where you could be found — Told 'em you were livin' downtown…”

Step back in time with Jim Larkin

After crossing Ha’penny Bridge you will be welcomed by the iconic Jim Larkin statue. The statue of the famous republican and trade unionist is located in the middle of O’Connell Street just down from the picturesque general post office. This historical landmark is the home to the GPO witness history visitor centre if you want to delve deeper into the rich Irish history and culture.

Be Inspired by James Joyce

While on O’Connell Street why not stop by James Joyce statue showing the much-admired 20th-century Irish novelist and poet, known for his work “Ulysses.” The statue is located on North Earl Street just opposite the iconic Spire.

Delve deep into Ireland’s historic past with the famine memorial

Stroll down to the North Dock where you can witness and emerge yourself in the dark history of Ireland. The famine memorial statues show the famine victims of Ireland history. The statues are accompanied by the Jeanie Johnston Tall Ship, a replica Famine ship used to bring Irish citizens to the ‘new world’ and escape for a better life away from the tragic famine.

Folklore of the Children of Lir

Only a short stroll from O’Connell Street is the garden of remembrance where the Children of Lir, a myth of Irish history is featured. The old Irish myth tells a story of King Lir’s children who were bewitched by their stepmother into swans. The 4 beautiful swans still had their voices and sang every day for 900 years till their curse was lifted with the ringing of a bell, and the arrival of St. Patrick in Ireland. When their curse was lifted they soon grew old quickly and their faith was uncertain till they were christened and there name and legend could live on forever.

We can agree Dublin is not short of statues and Instagram snapshot opportunities. Every statue has a story behind it, whether it’s a story of Irish folklore, how Ireland got their freedom or the poets and writer which brought us so much joy. Failte Ireland is helping to tell the stories of the statues with providing them with the gift of the gab! When passing a Talking Statue simply scan the QR code with your phone then just wait for the callback and marvel at the magic of modern technology as you listen to these snappy monologues. For the list of statues visit talkingstatuesdublin.ie.

Visit our Dublin attraction hub to learn about some of the best things to do in Dublin.